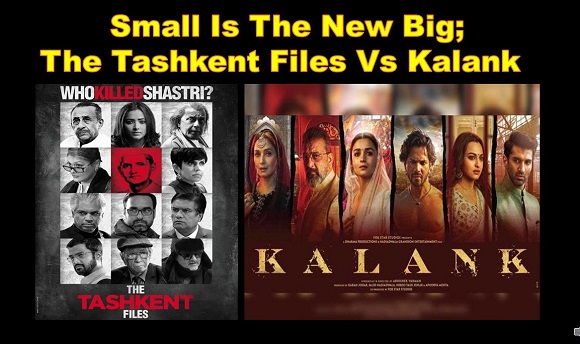 Small Is The New Big;

The Tashkent Files Vs Kalank

Social media nowadays has proved to be a potent tool for the youth to decide whether they wish to be part of the unhindered growth of their country or stay dumb self centered mindless followers. Thankfully unlike our generation, the youth today is learning to challenge the authority in order to make better choices. They think, they research not only about major issues relating to country’s future leadership but also the not so important decisions like which movie to watch during weekend. Every little act of Indians is showcasing the changing mindset. These are the times when we are not ready to accept things as they come. We Indians are understanding that we have right to know the truth and something that looks grand might not be true to its being in reality.

Films had always been a show window which reflects the transforming trends of society. The box office collections of the recent film releases ‘The Tashkent Files’ and ‘Kalank’ made it crystal clear that our tastes are changing and today’s indian cinema lovers are looking for the flavour of truth not grandeur. It is amazing to see a big budget multi starrer like ‘Kalank’ struggling to attract viewers while a small budget, intelligent, content based film ‘The Tashkent Files’ is doing wonders. Indian cinema is indeed evolving. Also evolving along with it is the new mantra, ‘Small Is The New Big’ based on The Tashkent Files Vs Kalank.  .

Small is the new Big

‘Small is the new Big’ is the new mantra. ‘The Tashkent Files’ Vs ‘Kalank’ has played a big role in making people realise that small truths matter more than big lies. Indian cinegoers are looking for value for money and the basic definition of that ‘value’ has changed now. We ask for truthful cinema instead of mega sets and costume parade. I am a self proclaimed movie buff but it pained me to waste my time and money for senseless confused masala movie like Karan Johar’s recent offering ‘Kalank’. I look for entertainment which tickles my brain, makes me think and question all that is happening around me.

I am part of a setup where we can watch movies at a discounted rate of INR 50. Believe me I was forced by circumstances to watch ‘Kalank’ and I really cursed everyone around for making me waste INR 50. On the contrary I had no second thoughts spending INR 350 for ‘The Tashkent Files’. Isn’t it strange that the famous movie reviewers decided not to review ‘The Tashkent Files’ but all the good reviews have come from young YouTubers. I would love to agree with Vivek Agnihotri as he talks about the ‘Film Review Mafia’ of Bollywood. He is so correct and one really feels appalled by this disturbing trend in the world of entertainment. Though I feel proud of the power of young intelligent people who reviewed ‘The Tashkent Files’ and showed that the power can be taken away from the grip of the few.

The Tashkent Files Vs Kalank- Lessons

Filmmakers like Karan Johar need to stop taking viewers for granted and fool them with garbage packed inside beautiful wrapping. Today’s viewers are neither looking for the big casting of film nor expensive sets and costumes; they are asking for intelligent content. Vivek Agnihotri’s ‘The Tashkent Files’ is what an intelligent Indian cinema lover is looking for. The wasted star cast of ‘Kalank’ must learn a few lessons from the ones of ‘The Tashkent Files’ and stop following blindly their patrons like Karan Johar. His arrogance has let all the actors down. I feel pity for the likes of Madhuri Dixit who got caught between bad makeup (still can’t get over her drooping lose skin of one eyelid) and a stupid storyline. Varun and Alia, please use your brains if you have any and understand that sometimes it is okay to say NO to your mentor if he has nothing worthwhile to offer. Remember, massive sets only can’t create a ‘Bahubali’ kind of success, it surely takes much more intelligence and skills than that.

Dear Indians, please stop believing in the film reviews by big names in the list of film reviewers. Check film and trailer public reviews by fresh young faces doing a great job on YouTube because ‘Small Is The New Big; The Tashkent Files Vs Kalank’ has undoubtedly set a new trend this time.

Must read these too… 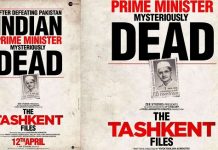 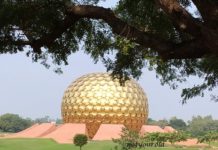 She Gives Away Her Best So That They Could Bloom

My Love Killed My Sole